OPERATION UBIWAVE is a custom season I (JinkJones) have created out of my love for Rainbow 6: Siege. I love it when companies capitalise on their other owned IPs, recently I platinumed Watch Dogs 2 on the PS4 and it got me thinking.. If at the end of this Annual DLC pack UBISOFT was to move on and start work on Siege 2. In the last breath of the game I would have loved to see them say thank you by releasing two operator packs (2 ATK and 2 DEF) that uses ideas from the characters from other UBISOFT games. This is the first out 4 ideas I have, the others will come out soon.

Not much is known about this man as every file on him seems to have disappeared from existence. Hearsay says he is a young man from San Francisco associated deeply with the hacking group ‘DedSec’. DedSec is known to be responsible for taking the world famous security Network ‘Ctos’ offline. Retro joins us for the sole purpose of gaining more experience in intimate skirmishes and we are welcome to have his skills on the team.

All weapons Retro uses have been custom made in the Dedsec 3D Printer located in the Dedsec HQ. For this Reason these weapons are not considered to be field tested and output low damage.

~ After an enemy is stunned by the taser stun gun retro’s guns do higher damage for 3 seconds.

Retro can hack into enemy cameras within a short range from his position via his Dedsec cell phone. he can then tag foes, provide guidance and sabotage enemy uplinks whilst being connected to that camera. Instead of a set amount of gadget uses, the use of retros hacking ability relies on his battery power. His battery power will rely on bars, starting each round with three bars. Hacking costs half a bar to connect to a camera each time, lasting 15 second intervals. Tagging will cost half a bar also. Uploading a virus to a camera will Bug the camera reducing enemy coverage for 8 seconds this will cost a bar and a half and will take 5 seconds to upload. you can also Temporary lock out defenders by disabling a camera for 10 seconds. this will cost retro a full bar but will also boot retro from it. 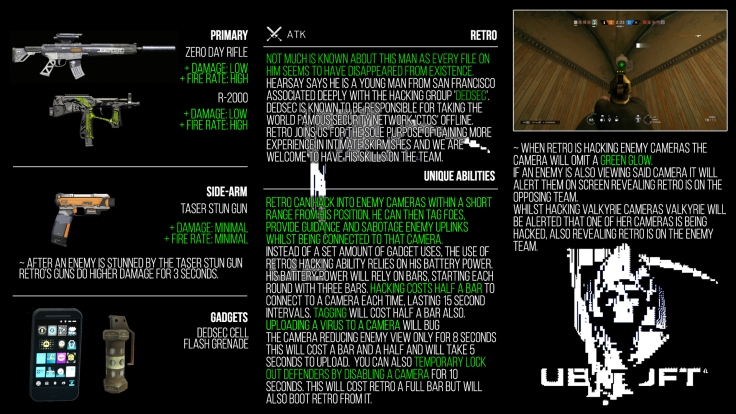 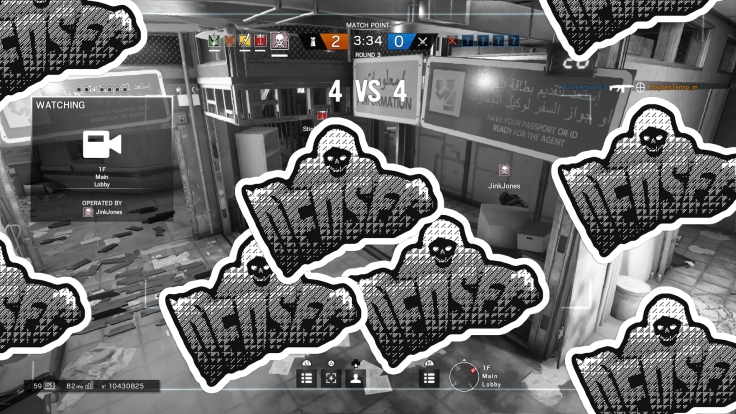